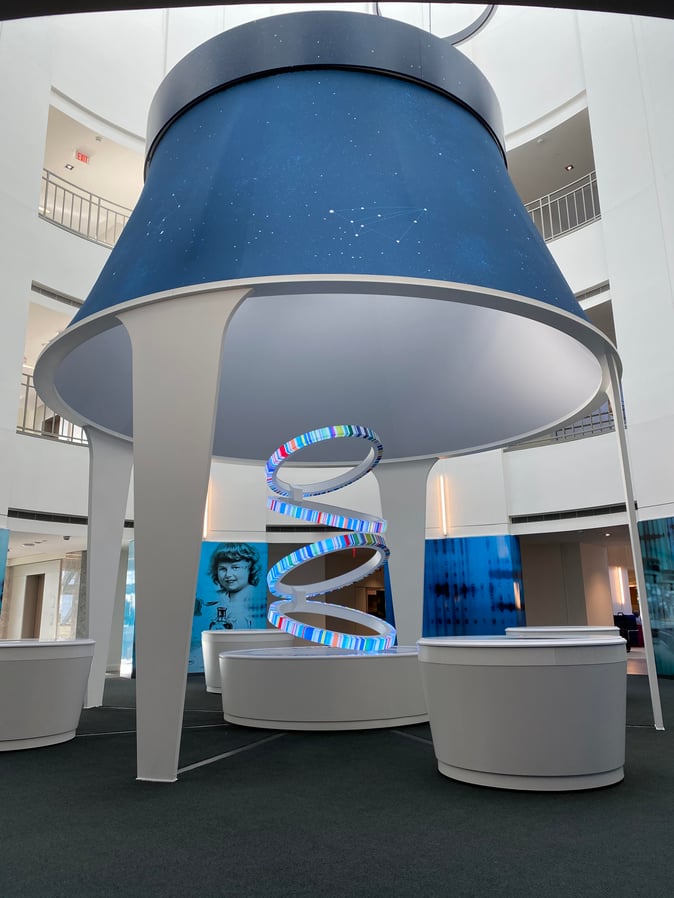 Transformit recently fabricated and installed a large fabric projection cone at the request of the Toronto offices of Kubik, the exhibit, event, museum, retail, and interior design company.

The interior cone shape acts as a projection surface for a 4-station information kiosk that was installed in a 3-story lobby atrium at the offices of a pharmaceutical company. The design called for four touch screen workstations mounted to the floor in a circle with a large projection cone suspended overhead to provide room for four separate corresponding screens. The four projectors were originally specified to attach to a truss from above, but structural conditions in the atrium forced the design to be completely ground supported. The steel structure that supports the four heavy projectors needed to be hidden, so we actually produced both an inner cone and an outer cone and sandwiched the steel structure and all of the cables between the two. The inner cone has the projection surface with a light-block liner and the outer cone has a graphic star field printed by dye-sublimation. The steel infrastructure was designed and fabricated in Toronto while the cones were being made in Maine, and the tight turnaround time was achieved with careful planning and CAD file sharing.

For the installation, Transformit designed the inner cone with telescoping poles that could be expanded and clicked into place within the tight confines of the steel structure. The final product went from napkin sketch to completed installation in 6 weeks, and the client was pleased with the results.