In July 2010, art director Caleb Brown asked us to help design a new exhibit for The North Face at Outdoor Retailer, a twice-yearly industry show in Salt Lake City. For years, The North Face had exhibited privately, in meeting rooms away from the main show floor. New management wanted to rejoin the activity on the show floor, and to invite the entire show audience to experience The North Face. 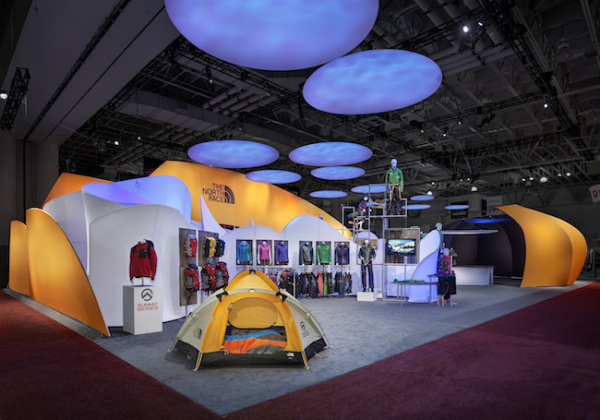 Creative brief:
Caleb asked us to assert The North Face's leadership position in both technical innovation and sustainability, to deliver an exciting brand experience to visitors, and to show six groups of products in areas clearly delineated by activity: Outdoor, Performance, Action Sports, Youth, Equipment, and Footwear. Perfection in execution was expected in the product display. 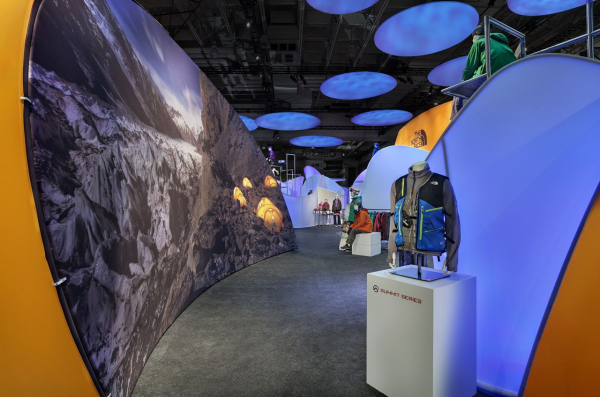 Design process:
Once the business end was under control, Caleb came to Transformit to develop the design with our team- Tom Newhall and Tom Chabot supported by Cindy Thompson and Matt Rawdon. This allowed us to quickly test, reject and modify many ideas. 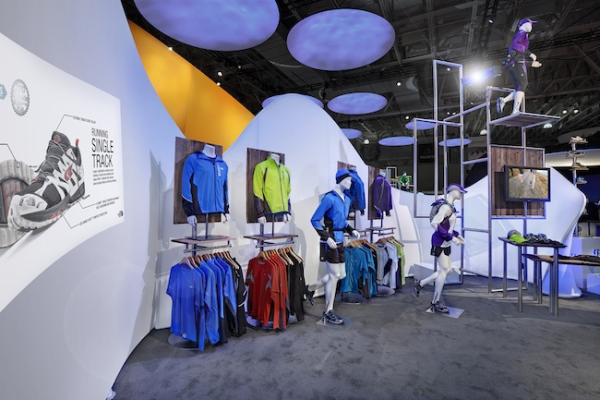 Core design ideas:
From our initial wide-ranging conversations emerged three core ideas:  1) the exhibit was to express the company's deep roots in outdoor equipment; specifically The North Face's iconic dome tents,  2) the design was to be proportioned after the ancient Greek "golden section" or "golden ratio", and 3) it was to demonstrateThe North Face's commitment to environmental stewardship. 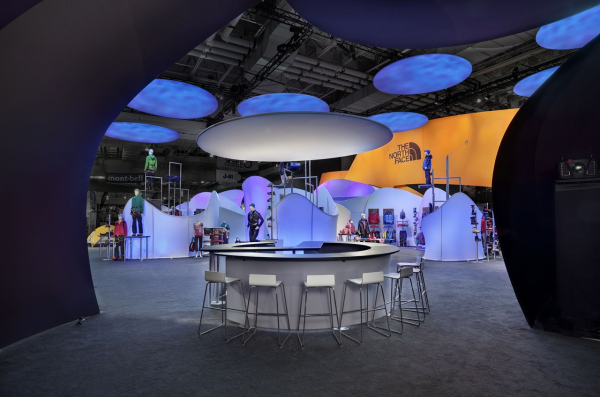 Key physical elements:
The exhibit is centered around the circular Summit Bar, shaped like the logo of the Summit Series of high-end products. It is the central meeting point for visitors. The bar sits in the opening of the Half Dome theater, where live presentations are made, and amazing videos of sponsored athletes are shown in a controlled environment. Spiraling away from the theater and bar are the product display areas, each area being defined by a 14' tall "cairn" (the term for trail markers made from pile of rocks), an appropriately dressed mannequin, and associated product displays. In each product area, a video monitor and a digital projector show motion graphics and video related to that area. At the perimeter of the exhibit space are four private meeting rooms named after famous mountain ranges. Overhead, matching the spiral arrangement of the floor plan, are suspended circular clouds, onto which lighting is projected from below. At the perimeter on three sides are very large tent-like shapes in The North Face's signature yellow-orange color. 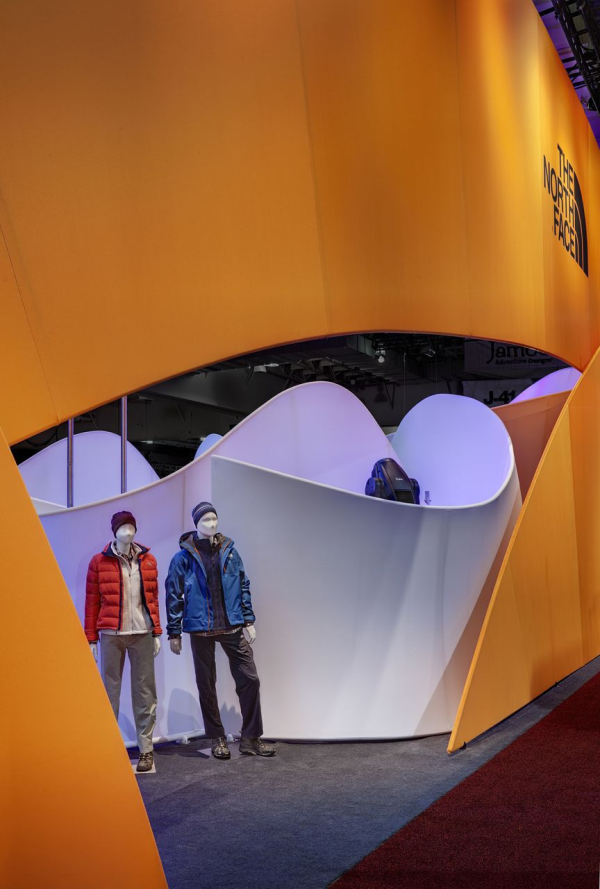 Technical and aesthetic highlights:
The Summit Bar's top is made from PaperStone, a durable material made entirely from recycled paper fused together with resin made from cashew shells. The theater walls, the meeting rooms and the clouds all have inner linings made from PolySoft, our shape-conforming, sound-absorbing fabric. Those meeting rooms and the theater are an oasis of quiet in the cacophony of the show hall. The walls of the meeting rooms and the product area dividers were internally lit by glacier-blue LEDs. The product displays and cairns pair highly developed stainless steel structural elements with panels and shelves made from reclaimed barn wood, much the same as The North Face's highly technical products coexist with the company's long history of environmental stewardship efforts. These displays were adapted for trade show use from designs by Gensler used in a prototype store. We made them modular and adjustable, and they were configured by The North Face merchandisers in creative ways we had not imagined when we designed them. The overall look of the curvy white walls piled up together is one of a snowy mountain range, calling to mind John Muir's name for the Sierra Nevada: "Range of Light". 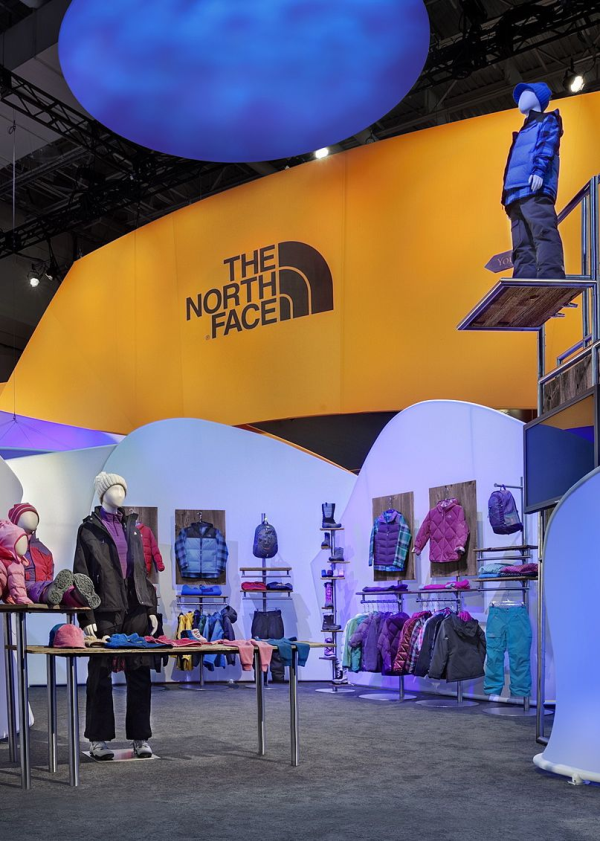 Practical highlights:
The entire design is modular: Subsets can be used for smaller shows or showrooms, and the exhibit can be easily reconfigured. It is a large exhibit (6,000 square feet) but weighs less than 15,000 pounds. When packed, it fits in six steel carts enclosed by fabric covers. The carts can be fork-lifted, or wheeled by hand on built-in casters. The carts fill 32 feet of a 53 foot trailer. Nearly all of the exhibit will be recycled or repurposed at the end of its life. The North Face is in the process of conducting an "Eco-audit" of the exhibit's carbon footprint. 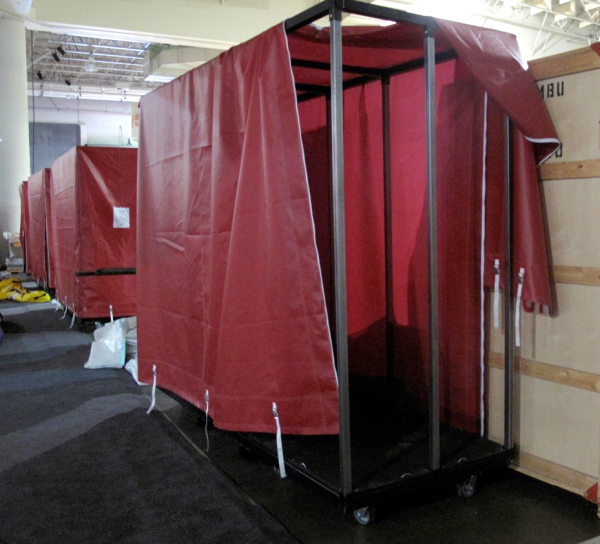 Result:
The exhibit made its debut at Outdoor Retailer Winter Market 2011, to enthusiastic reviews by show attendees and The North Face employees alike. It was awarded Best Booth Overall by SNEWS, an independent trade news magazine. 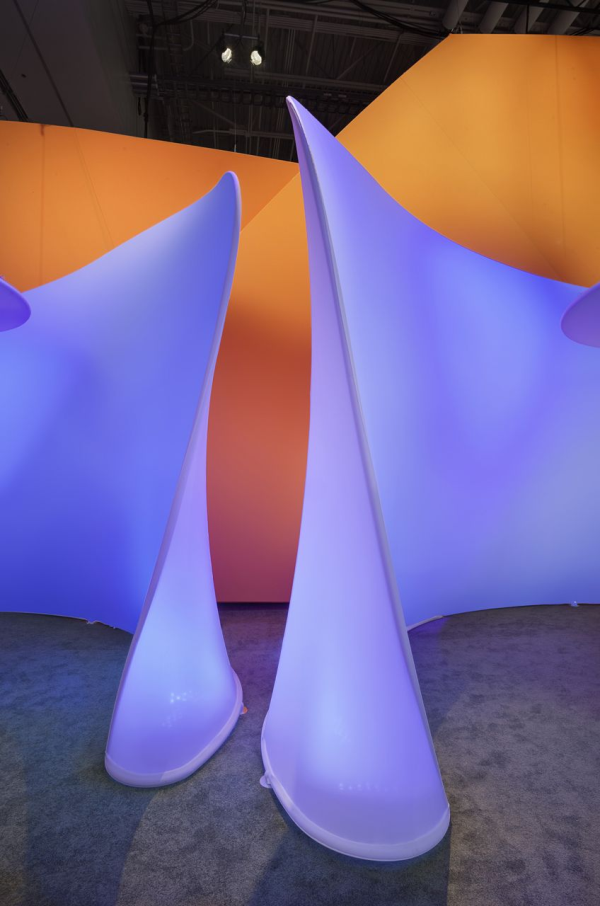