Transformit was chosen to design, engineer and fabricate the exhibition’s star element, a giant freshwater stingray. Shown here are pictures of the stingray during construction in our shop, and at the exhibition’s opening.

Using sketches provided by National Geographic, and internet photos of giant stingrays, Transformit’s design team created a 3-dimensional computer model, which was then used to create the drawings for the internal frame structure. Once the frame structure was set, patterns were made made of the numerous fabric panels required to make the stingray’s fabric skin, and an unprinted mockup of the skin was made to prove the pattern. Graphic templates were made and sent to National Geographic for placement of the skin’s graphics. Once the graphics were placed on the templates, the stingray image was printed by dye sublimation onto stretch fabric. The final step was to stitch together the skin’s panels so all the graphics matched up nicely. This is easier said than done! A mistake anywhere on this complex 3-d structure would show on the final product.

The exhibition may be seen at the National Geographic Museum in Washington, DC, through October 11, 2015. Then it will travel to the Nevada Discovery Museum in Reno, NV, from November 2015 to April 2016.

Also shown are pictures and links to video of a real giant stingray, courtesy of Zeb Hogan and National Geographic. 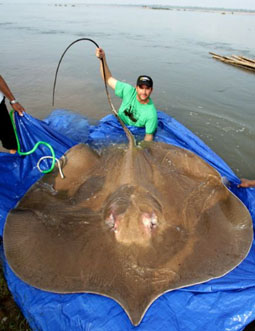 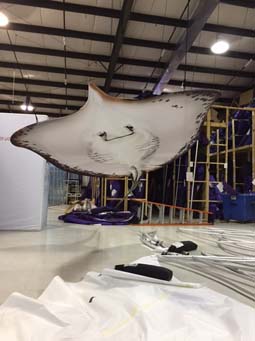 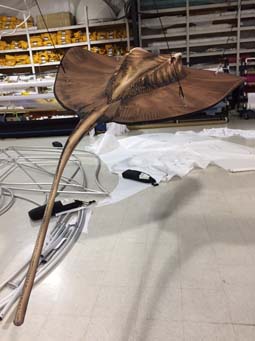 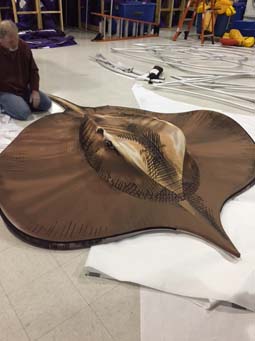 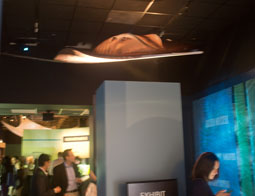 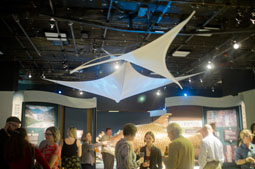