As a pro bono project, we were asked to provide a compelling stage installation for TEDx Dirigo, an independently organized TED event held in Bar Harbor, Maine on May 21, 2016. Entitled Ebb + Flow, most presentations were closely linked to Maine or the ocean, and all the event's speakers live and work in Maine. The event took place at the beautifully restored 1932 Criterion Theater, in the center of Bar Harbor.

Our designer decided to make the stage look like tumbled rocks on the Maine Coast. "I initially designed the set on the computer by building a model of the octagonal theater, then picking the most challenging seats in the house as camera positions.”

The design was restricted to items already in our rental inventory. Fortunately, we had recently “rescued” a collection of white fabric Cubes from another customer’s warehouse, where, we all agreed, they would have lain unnoticed until the warehouse changed hands.

The designer’s challenge was to make an interesting and beautiful stage without modifying the Cubes, and to install them so that they were not damaged. Since the work was pro bono, the designer also served as installer!

“Once the installers at AVTechnik had hung the projection screen, I went to work arranging the Cubes as I had on the computer. By propping the back corners up with sandbags, resting the pieces on each other at angles, and cradling larger Cubes with undressed frames in the rear, I was able to build a stable foundation on which to stack smaller Cubes. The stretch fabric allowed me to dig corners into the flat surfaces, which provided enough tension to hold Cubes at interesting angles. The lighting crew placed 8 LED lights in the spaces between the cubes so they could all glow different colors, depending on what was happening during the TEDx talks.”

“There was one more constraint: between rehearsals, the theater needed to fulfill its alternate role as a movie theater, so almost all of the Cubes were positioned behind the large movie screen, which filled the entire proscenium. When the movie screen was lifted, we could prepare for the next rehearsal simply by bringing a few Cubes out to the outer stage, so they would look like they had fallen off the pile.”

We received many compliments on the beauty and simplicity of the stage. We were able to keep the Cubes in circulation without damage, and we kept everyone’s expenses down. Reduced weight, reused structures, nothing in the landfill. The recyclers will get their turn, but they’ll have to wait! 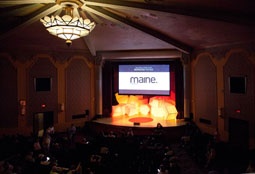 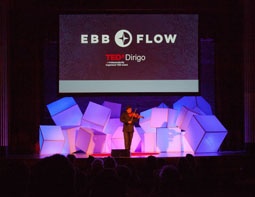 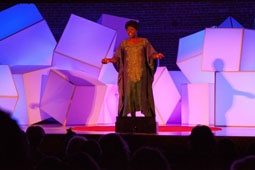 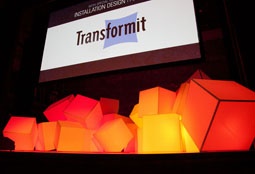